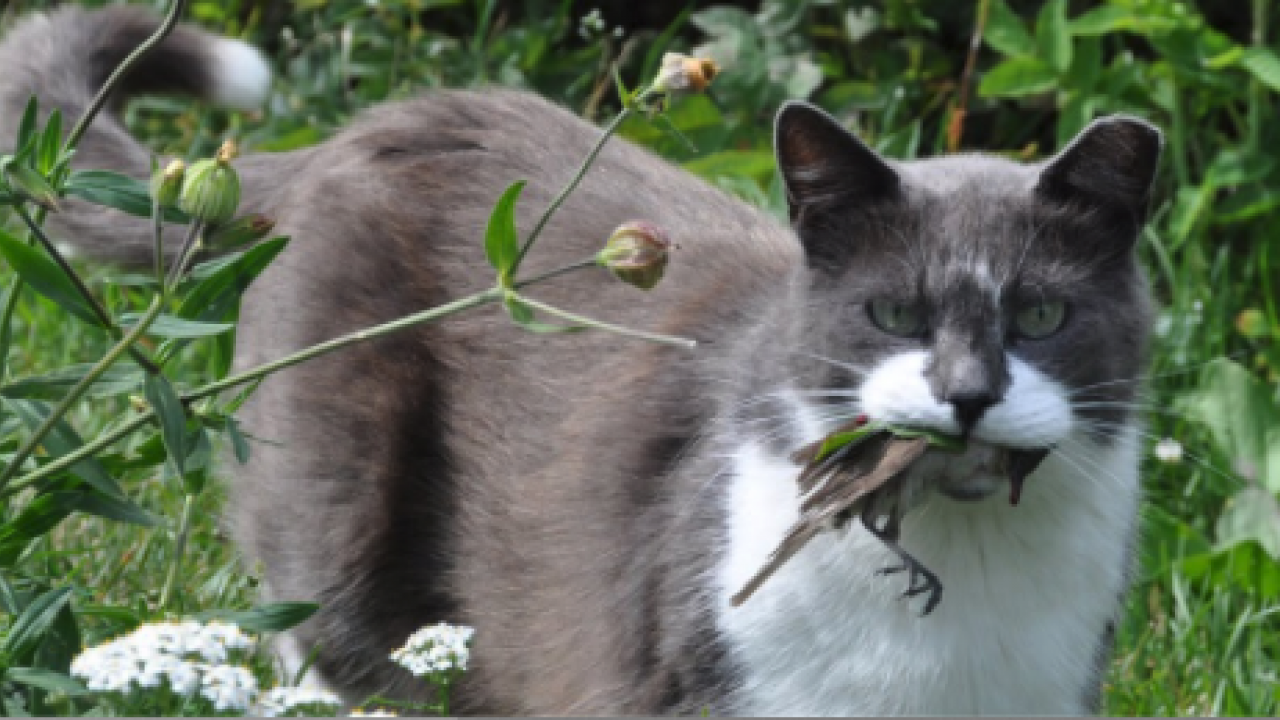 Don’t let the tiny paw prints, fluffy fur and charming whiskers fool you. Your household feline companion may be much more fierce than you think — and if they spend any time outdoors, they are likely disrupting the natural local ecosystem!

Countless studies have shown that cats are an invasive predator, meaning that they disrupt the natural food chains that exist in nature when they go outside and kill animals that are native to the region. Around the world pet cats are directly responsible for the extinction of 33 bird species, and in the United States they are estimated to kill more than 1 billion birds and more than 6 billion small mammals annually. Even if you’ve never seen your cuddly cat make a kill or bring one home, recent studies, like the “Kitty Cam” project at University of Georgia show pet cats sneak off and show the ferociousness they’re capable of in the wild, all before returning home for a nice cat nap.

The number of pet cats is only increasing, making their effects increasingly more prominent. Meanwhile, some local species are becoming increasingly vulnerable to extinction, with their populations on the decline. Not only are they taking food away from other predators that would normally eat these animals, but they are also killing the prey much faster than the natural rate, leaving the small mammals and birds that they mainly feed on unable to recuperate in numbers.

Domestic cat predation is not all bad however, and can also at times be good for the native ecosystems. Pet cats in California were found to occasionally prey on non-native species such as house mice and black rats, which can also be disruptive to the native ecosystem by eating local plants that other local species would usually rely on.

Being a predator is not the only problem with cats roaming free, however. Cats can also be prey in their local food chain to larger predators outdoors, including coyotes. A study by the National Parks Service of Southern California coyote poop found that 20 percent of urban coyote scat contained domestic cat remains, showing cats make up a significant amount of their diet.

How can we help solve the problem outdoor cats pose in our community?

Putting bells on cat collars has been shown to be effective in reducing the successful kills of a cat, although it is not always effective because prey may not always recognize a bell as a predator attack. It also does not put them in a good position over their hungry predators. Another common solution is to declaw cats, meaning to remove their claws so they aren’t able to use them for hunting. Declawing comes with countless downsides however, including leaving an outdoor cat defenseless against their predators, and negative health impacts.

But there’s one simple, easy, and effective solution to the problems of letting a pet cat roam free: Keep them inside! Not only will the local animals and ecosystem be safe from the cat, but you can rest easy knowing your pet is safe and sound.