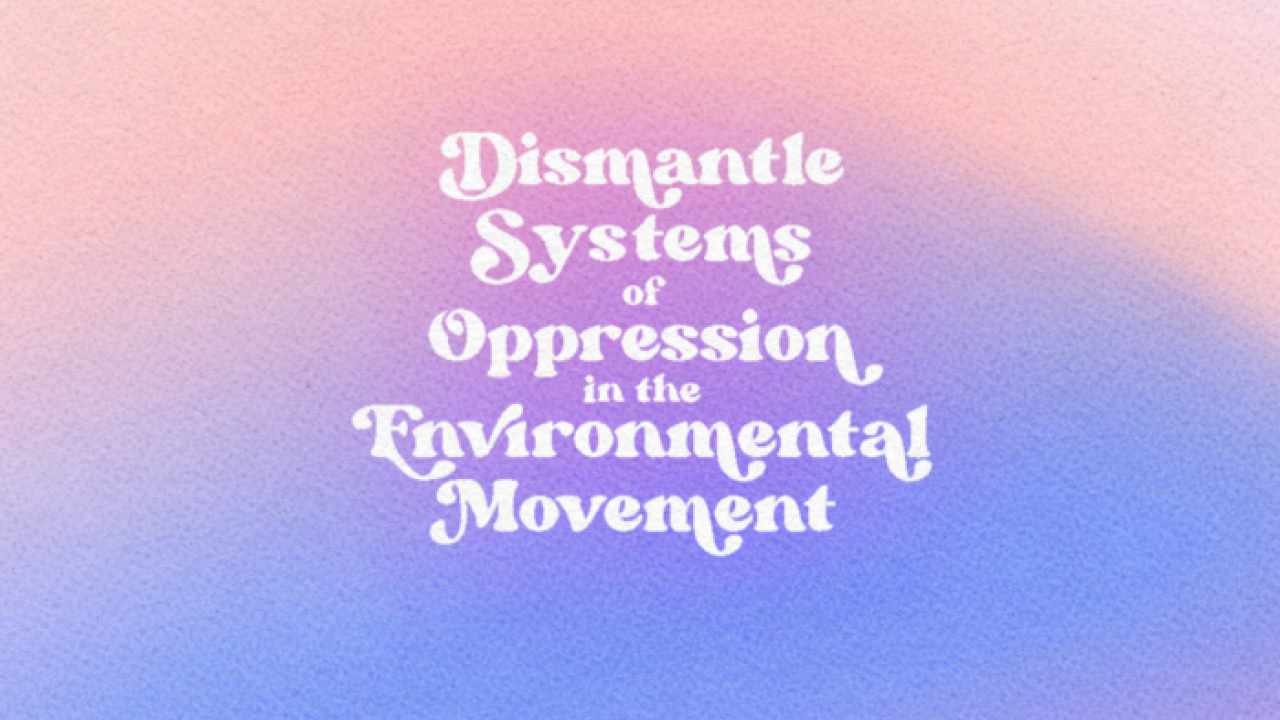 All too often these words and phrases evoke images of the melting polar ice caps, of rising sea levels, and of natural disasters of increasing ferocity. I have found myself often pondering, wondering, and questioning, why do these phrases not evoke images of people and communities? I believe that as a society we have created a nostalgic and eerily comforting image that the impending climate crisis is a phenomena separate from our current lives. It is a problem reserved for non-human species, for future generations. Not me, not us, not now.

Not only have we all carefully crafted the notion that the effects of climate change are not occurring as we speak, but we have very deliberately and carefully disassociated the injustices facing our planet with the same injustices facing communities of color today. The danger of our human need to categorize, dichotomize, and define has resulted in a great global disconnect. We can no longer see that to protect the environment and our planet, we must also protect and uphold the needs of the world’s historically and systematically marginalized populations. It is time to recognize that the very systems of oppression that perpetuate environmental inequity and degradation are the very systems that work to oppress and marginalize communities of color.

Intersectional Environmentalism, founded by Climate Activist Leah Thomas, is an inclusive form of environmentalism that advocates for the protection of all people and the environment. The movement traces its ideological roots to the works pioneered by the Combahee River Collective and American lawyer, civil rights activist, and leading critical race scholar Kimberlé Crenshaw. Intersectionality refers to the complex and cumulative ways in which multiple forms of oppression and discrimination (such as racism, sexism, and ableism) can intertwine, compound, and intersect in relation to an individual’s unique position in society.

With this history in mind, intersectional environmentalism identifies and highlights the ways that injustices facing frontline communities and the planet are undeniably interconnected. The movement demands that advocating for the needs of the planet must be in conjunction with recognizing and combating the systemic injustices and inequities that target vulnerable communities. Intersectional environmentalism calls for justice for the people and the planet.

The best way to conceptualize and understand the dire need for intersectional environmentalism is to discuss the ways in which groups facing marginalization are disproportionately facing the impacts of climate change and ecological degradation.

The disproportionate impact of climate change shouldered by marginalized communities is evident in the perpetuation of environmental racism. Environmental racism refers to the disproportionate exposure to environmental hazards and toxins faced by communities of color. This is the direct result of historically racist policies and zoning that have deliberately cited communities of colors closer to landfills, toxic waste sites, fracking sites, and other sites of toxicity. Living in proximity to environmental toxicity — often the very same chemicals and emissions driving climate change — has led to communities of color being exposed to harmful toxins at much higher rates than predominantly White and more affluent communities. As a result of these systemic inequities, these already vulnerable communities face serious health risks in the form of higher rates of cancer, respiratory ailments, heart attacks, asthma, and lower birth rates.

Climate vulnerability not only lies at the intersection of race, but also in relation to sexuality, citizenship status, gender, economic status, ability, and educational attainment.

The 2SLGBTQIA+ ( 2 Spirit, Lesbian, Gay, Bisexual, Transgender, Queer, Intersex, Asexual) community already faces discrimination, exclusion, and violence due to social stigma on an alarmingly regular basis. The effects of climate change and natural disasters work to exacerbate the social stigma that makes it difficult for members of this community to receive access to critical resources and services. Members of the 2SLGBTQIA+ community are more likely to be unhoused, experience higher rates of unemployment, and typically lack access to the same information and resources as the general population due to exclusionary practices. All of these socially constructed conditions result in members of the 2SLGBTQIA+ community being more vulnerable and less able to adapt to the effects of climate change and natural disasters.

Similarly, women also face heightened levels of vulnerability to climate change due to their historical role in society. In the vast majority of the world, women continue to be the primary caretaker of children, manage the home, and perform agricultural duties. Climate change is making it incredibly difficult to perform these duties that have been historically reserved for women. Women are also more likely to face human rights abuses in the form of human-trafficking and sexual violence in the wake of natural disasters in which many individuals become displaced and are forced to flee their homes.

It is abundantly clear that marginalized communities face unique and compounding vulnerabilities in the face of the climate crisis. We can no longer advocate for the needs of the planet without advocating for the needs of the world’s most marginalized populations. Climate justice is indeed social justice. These two movements cannot be separated, true climate liberation cannot be attained without social liberation. The time has come to demand systemic action, redefine environmentalism, and transform the ways in which we discuss climate change. Take time to unlearn, relearn, and to recognize the systems of oppression at work in the world around us. Today and always we must recognize the need to protect the planet and its people, let your actions and activism be intentional and intersectional. Climate change is more than rising sea levels and melting glaciers, it’s people, it’s lives, it’s communities. Climate justice is racial justice, equity, land backs, reparations, corporate accountability, degrowth, anti-capitalism, gender equality.